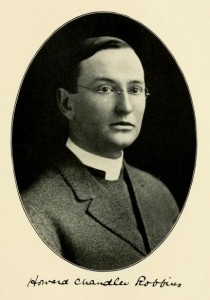 The Reverend Howard Chandler Robbins served at the General Theological Seminary from 1929 to 1941 as the Eugene Augustus Hoffman Professor of Pastoral Theology. As early as 1911, he began collecting original letters written by U.S. bishops, eventually amassing some 9,000 documents before his collection was rounded off in the mid-1940s. Until the 1890s, when bishops started using typewriters for their correspondence, letters were handwritten, and it is usually a simple matter to determine whether a letter was written by a secretary or by the signatory (“autograph letter signed,” or ALS).

Robbins apparently got the collecting bug at about the time he became rector of the Church of the Incarnation in Manhattan, where he served from 1911 to 1917. From 1917 to 1929, he was dean of the Cathedral of St. John the Divine, a venue that would have provided him with many new collecting contacts, and as a professor at General Seminary, he could and did draw on the seminary’s many alumni. It is not known where or how Robbins acquired many of the oldest documents in the collection, but it is clear that he eventually canvassed living bishops, not only for samples of their own correspondence, but also for samples from other bishops, living or dead, whose letters they might own or know where to find.

Clergy, for all their years of faithful service, do not always make headlines or become household names generations after they have died, but H.C. Robbins earned some celebrity in Episcopal circles for several hymns that appear in the 1982 Hymnal: #108, Now yield we thanks and praise (words); #406, Most High, omnipotent, good Lord (translation); and #521, Put forth, O God, thy Spirit’s might (words and music).

Interestingly, his collection of bishops’ letters is not necessarily his most impressive achievement in the area of preserving precious writings. In 1943 at the little Union Church in Heath, Massachusetts, Dr. Robbins heard Reinhold Niebuhr preach a sermon that included the now world-famous Serenity Prayer. Robbins obtained a copy of the prayer from Niebuhr and had it published in a manual for army chaplains that was distributed to hundreds of thousands of servicemen and -women during World War II. Without that wide dissemination, the prayer might never have come to the notice of Alcoholics Anonymous, which several years later incorporated it as one of its key texts.

Robbins was a delegate to the World Conference on Faith and Order at Edinburgh, Scotland, in 1937. He was a member of the administrative committee of the Federal Council of the Churches of Christ in America. He was also a member of the American Bible Society and the Church Peace Union. Robbins wrote numerous books, most notably Cathedral Sermons (1927), Charles Lewis Slattery (1931), and Preaching the Gospel (1939). Robbins died in Washington, D.C. in 1952.

Additional details of Dr. Robbins’s life and work may be found in An Episcopal Dictionary of the Church: A User-friendly Reference for Episcopalians, by Donald S. Armentrout (New York: Church Publishing, 1999).

Dr. Robbins left his collection to what is now the Christoph Keller, Jr. Library at the General Theological Seminary.

The Keller Library is most grateful to faithful library volunteer Colin Sanderson for his work preparing this finding aid. We thank Wayne Kempton, Historiographer and Archivist of the Diocese of New York, for his assistance with this research.

You Are Here: Home » Robbins Collection of Bishops' Papers

Starting June 1st, the library will be reopened to the public. Visitors must be fully vaccinated and show proof at the front desk. Masks are not required for those who are fully vaccinated. Please keep the following guidelines in mind: